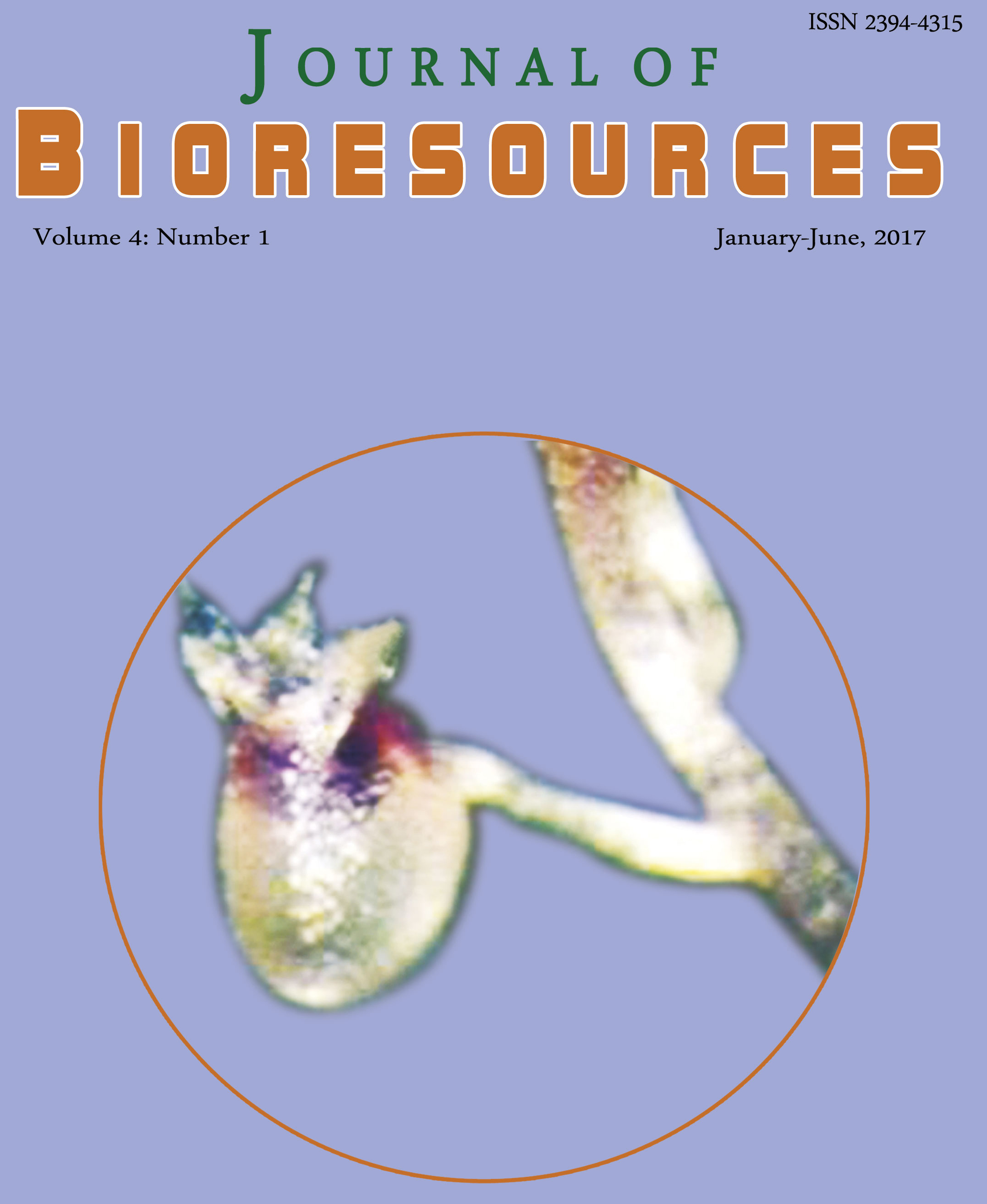 Abstract: North East India is a rich phyto-diversity area positioned in the Indo-Burma and Himalayan Biodiversity hotspot. Around 1800 species of plants including several rare, endangered and endemic species have been recorded from this region with ethno-medico-botanical information. The use of plants for medicinal purposes with traditional know-how is a much prevalent practices throughout NE India. At this time, concern on various aspects of medicinal plants is gaining importance throughout the globe. Research focus is escalating on a wide spectrum of activities starting from in vitro propagation to metabolomics. Biotechnology tools and techniques are being used to select, multiply, evaluate and improve medicinal plants throughout the globe. Various techniques like micropropagation, cell suspension culture for secondary metabolite production, combinatorial biosynthesis, genetic transformation with desired gene, engineering of agronomic traits, metabolomics, profiling of germplasm using molecular markers are being used to achieve characterization and improvement of medicinal plants. During last two decades or so, biotechnology based R&D programmes are getting a momentum on utilization and development of medicinal plants in NE India. This paper attempted to highlight the success and lead in identification of diverse plant genetic resources of NE India using biochemical and molecular markers; high frequency in vitro regeneration of plants and plant parts for micropropagation and production of secondary metabolites; bioprospecting for novel phyto-chemicals, screening of high yielding elite clones and assessment and bioassay of medicinal properties.

Dipteran Flies as Pollinator and Their Prospective Role in Orchid Pollination of Eastern Himalaya: An Appraisal

Abstract: In Eastern Himalaya, at least 50 species of soft bodied Dipterans are well known pollinators. Unfortunately flies as pollinators has received less attention but members belonging to the families viz., Ceratopogonidae, Chironomidae, Culicidae, Mycetophilidae, Pyralidae and Tipulidae has been implicated as potent pollinators. These pollinating flies facilitate seed and fruit production of several important plants including Orchids which possess significant commercial and ornamental attributes. Pollination is an intrinsic natural incident for propagating germ line and has a great evolutionary significance as it also leads to overall gain of heterozygosity of the floral community. The biology of orchid is most pragmatic in evolutionary history and complex floral structure always being an attraction to pollinators. Nearly half of the 1500 orchids found in Himalayan region are pollinated by insects viz. Acampe praemorsa, Aerides sp. , Bulbophyllum neilgherrense, Cymbidium aloifolium, Dendrobium barbatulum, D. crepidatum, Habenaria grandifloriformis, Oberonia brunoniana, Platanthera obtusata and Rhynchostylis retusa. There are significant gaps in our knowledge in relation to the specific roles of Diptera in pollination network, which needs to be addressed in order to sustain agricultural practices and to decipher the intricacies of Orchid pollination. This review provides an overview of Dipteran pollinators with special emphasis on orchid pollination. This write up also provides a positive notion on plant-pollinator interaction, understanding the biology of this plant. In the light of orchid farming, conservation and propagation in North eastern region of India, the knowledge of this review can be utilized to ensure protection and propagation of this unique biodiversity group.

Abstract: The edible freshwater fish Schizothorax richardsonii in Arunachal Pradesh, India was examined for its helminth parasite spectrum. One monogenean fluke representing the genus Diplozoon sp. was recovered from the gills of host fish. The information on its surface fine topography was studied using SEM (Scanning Electron Microscopy). The X shaped, fused individuals were well displayed with the prominent prohaptor and opisthohaptor both containing host attachment structures. The paired prohaptor is divided by a partition which separates the muscular oral sucker. There are numerous muscular convolutions within the sucker. The body is covered with spines and convolutions. The opisthohaptor contains four pair of laterally positioned corrugated clamps and a rectangular shaped concave terminal end.

Abstract: Inner-line reserve forest and its adjoining areas of Barak Valley, Southern Assam is one of the prime habitat in north-east India of the Western hoolock gibbon (Hoolock hoolock ). Substantial number of gibbon groups are fighting for their survival in the fragmented patches in the reserve forest. The present study was conducted to assess the threats/ survival stress to the population of H. hoolock in the forest fragments of the Barak Valley district, Assam. Besides field observations, we employed a structured questionnaire survey method to interview villagers, including the Gaon Burha (village head) and local hunters. Based on our observations and the interviewees’ responses, we recorded that gibbons were occasionally hunted for bush meat and were evidently predators of particularly young gibbons in the fragmented forest patches. Indirect threats included habitat destruction and fragmentation, deforestation, extraction of non-timber forest products, livestock grazing, road construction, selective (illegal) logging, shifting cultivation, commercial cash-crops, and permanent human settlement. A conservation action plan is urgently needed to protect and conserve the Holock gibbon from extinction in the region.

A Microscopic Study of Two Dominant Bladderworts of Northeast India

Abstract: Bladderworts are annual or perennial herbs, which belong to the family Lentibulariaceae. Utricularia bifida Sm. and Utricularia pubescens Sm. are the most dominant and widely distributed bladderworts of Northeast India. The capability of trapping insects by the active bladders developed on the lower portion of the plants make them more interesting. This study was carried out to understand the morphology and ultrastructure of bladders of the two dominant Utricularia species. Plant samples were collected from the East Khasi Hills district of Meghalaya and were processed as per the standard methodologies for detail microscopic studies. The bladders of both species show double-layered walls. The antennae in U. bifida were unicellular and uniseriate, whereas, the antennae of U. pubescens were numerous, long and multicellular forming a fringe. The digestive glands were either bifid with two arms in U. bifida or quadrifid with four arms in the case of U. pubescens which bear short single-celled stalk. The stalk cells represent the basal portion of the arms or the terminal cells abutted from their respective sub-conical shaped pedestal cells. The wall partition between the pedestal and the basal portion of the stalk bear several finger-like projections of transfer cell type. The walls of pedestal, stalk and terminal arm cells were clearly differentiated into three layers. The outermost cuticle layer of pedestal cell was thick, which extended till the base of the terminal or arm cell. The innermost layer was not impregnated with variously shaped electron translucent numerous vacuoles filled with granules.

Abstract: Laboratory rat (Rattus norvegicus ) is one of the most commonly used model system and the gastrointestinal tract is the most vital organ system for an organism’s survival. So, a detailed study of its every aspect like pathology, histology, evolution, etc. is vital. Though various works has been done on the histology of the gastrointestinal tract of rat, this study aims to describe and illustrate the histomorphology of the esophagus, stomach, intestine and colon (large intestine) of laboratory rat and also measurements of various parts and layers of the tract with the help of advanced softwares and tools. Formalin fixed, paraffin embedded sections were used for routine Eosin-Haematoxylin staining and the sections were visualized using the Leica DM5000B microscope and analyzed using the LAS V4.4 software. Results showed that the gastrointestinal tract in general is made up of four layers mucosa, submucosa, muscularis and serosa when observed from the luminal side. The esophagus from inside to outside comprises broadly of a folded Mucosa, Submucosa, Muscularis propria, which is 81.60 μm thick and Adventitia. Submucosa of stomach is relatively loose and extensible measuring 86.99μm. The serosa layer is the outermost layer and is very thin. The mucosa of small intestine is folded to from villi. Intestinal villus is of 116.28 μm height and is lined by a simple, columnar epithelium. The Mucosa of colon (Large intestine) is 184.30 μm, which is lined by numerous glands responsible for the secretion of gastric juices as well as some protective mucus.

Abstract: Cynoglossum zeylanicum (Vahl exHornem. Thunb. exLehm. [Boraginaceae]) is a common shrub found in Lower Dibang Valley district of Arunachal Pradesh. The root bark is used by certain local people belonging to the Idu Mishmi tribe to deal with issues of female reproduction. The present investigation was designed to examine the effect of crude root bark extract’s estrogenic effects in vivo and fractionation by semi preparative HPLC. The extract of dry root bark was prepared in methanol. A threshold dose (1000mg/kg body weight/day) was administered through oral route to adult ovariectomized (OVX) and ovary intact female albino mice model. Crude extract was administered through oral route for two consecutive estrous cycles and for similar period in OVX. Vaginal smear was taken during the study period to determine the rate of cornification. Number of nucleated epithelial cells and cornified cells were considered only in the smear during the experiment. Cornification assay was performed by cell count of cornified cells and nucleated epithelial cells observed in smear in cm-1. Rate of cornification was expressed in terms of change in fold of cornification than the base line count on day 1 of treatment. Data were statistically analysed using students’ t test. Semi preparative HPLC - PDA was employed to study the characteristic compound present in the extract. The results showed significant increase in the rate of cornification not only in ovary intact mice but also induced vaginal cornification in ovariectomized model. The chromatographic fractionation in HPLC-PDA indicated several peak at different RT.

Abstract: Comparative analysis of pupal nutrient content of eri silkworm feeding on three alternative food plants i.e. Evodia fraxinifolia (Payam), Heteropanax fragrans (Kesseru) and Manihot utilissim a (Tapioca) along with the primary food plant Ricinus communis (Castor) was done in Nagaland, India to highlight the effect of food plants. Carbohydrate content was recorded to be maximum in Tapioca fed pupae followed by that of Kesseru, Castor and Payam. Total nitrogen and Protein content was maximum in Castor and minimum in Payam, however there was no significant difference in organic carbon, potassium, phosphorous and calcium content among the four food plants. Crude fat was found to be maximum in Payam and minimum in Kesseru. Variation in pupal nutrient content depends on the foliar constituents of different food plants of which castor is considered to be the best food plant followed by Tapioca, Payam and Kesseru to produce nutrient rich pupae and comparable with even non eri silkworm pupae as reported in other studies. Value addition to silkworm pupae can be enhanced by finding suitable preservation methods for wider market acceptability and for commercializing the concept of utilization.