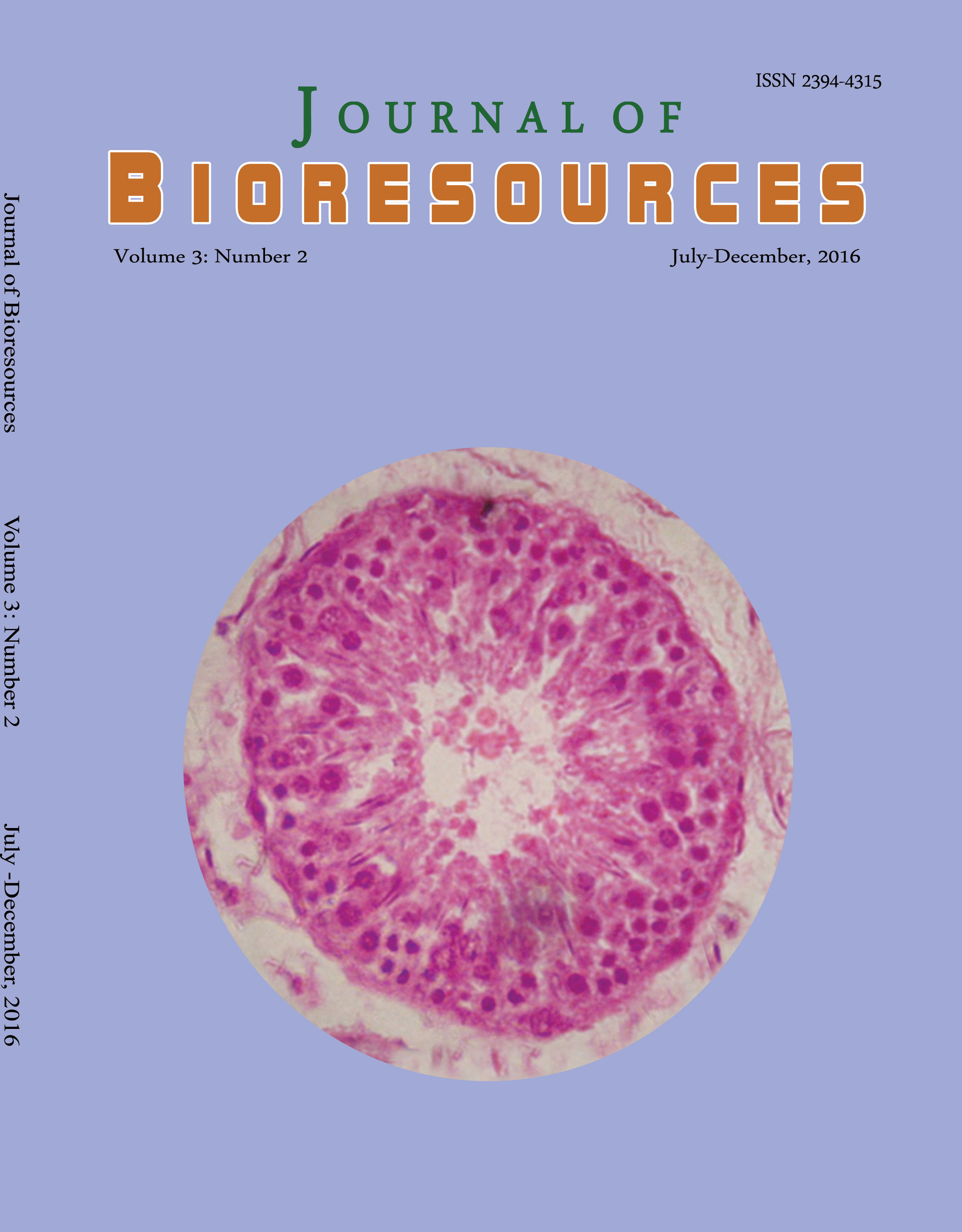 Abstract: A comparative random amplification of polymorphic DNA (RAPD) analysis is carried out for the first time on seven species ofMystus (Bagrid catfishes) distributed in two river basins, in the northeastern India, to evaluate the degree of genetic similarity among them. This study used thirteen arbitrary oligodecamer RAPD markers amplifying 639 reproducible and scorable bands of size 285 to 2150 bp which are assigned to 204 loci. Similarity index values obtained for each pairwise comparison among the seven species ranged between 0.208 to 0.454. The dendogram grouped all the seven species into two major clusters based on their genetic differences by reflecting the morphological differences among them. Cluster A includes M. rufescens, M. ngasep, M. bleekeri, M. cavasius and M. falcarius whereas M. tengara and M. dibrugarensis are fall under cluster B .The dendogram also clearly showed the genetic similarity of M. bleekeri populations of the upper and lower Brahmaputra basin by clustering together with a similarity index value of 0.454. Thus, the results have inferred that RAPD markers are useful in distinguishing the species of Mystus and establishing their interrelationship based on their genetic composition.

Occurrence of Marine Actinobacteria in the Subtropical front Sea water

Abstract: Marine environment is the largest environment on the planet and the oceans serve as the host for huge microbial populations whose diversity is still challenging. Among the ocean microbial populations, actinobacterial diversity is of paramount importance for natural products synthesis. Studies on marine actinobacteria from the marine sediments is well known. However, reports of actinobacterial diversity from sea water are only few. Present study is one of such initiative works to investigate the actinobacterial diversity from sub-tropical sea waters. Seawater samples from DCM (Deep Chlorophyll Maximum) region of the sub tropical front waters of the Southern Ocean were collected using Niskin (5L) water sampler during the Southern Ocean Expedition 6. Actinobacterial counts reached 1.2x10-2 CFU/ml of sea water. Among the isolates, four showed distinct morphological and physiological properties. Cultural characteristics were determined after 3-4 weeks according to the methods given in the International Streptomyces Project. Established procedures were used to determine the diagnostic isomers of DAP and the whole cell sugars. These isolates were identified upto genus level on the molecular (16S rDNA sequence analysis) basis and the occurrence of species of Streptomyces andSaccharopolyspora was observed. Present study, reporting the two generaStreptomyces andSaccharopolyspora from the subtropical sea waters, signifies that there is no dearth of the microbes in the sea water and it would be worth attempting to explore their diversity, using metagenomics. Such culture independent studies may reveal and include rare and novel forms of planktonic actinobacteria from the marine realm.

Abstract: The molluscs compose the large phylum of invertebrate, has around 85,000 extant species comprises about 23% of all the named marine organisms. They live in marine waters, freshwater and also terrestrial habitats. They are highly diverse with regards to their size, structure, behavior and in habitat. The phylum is typically divided into 10 taxonomic classes, of which two are entirely extinct. Like any other groups, several molluscs are being discovered every year and the list of molluscs increases on regular basis. In India malacologists have contributed in discovering ‘new species’ every now and then. Despite the above, as Goa was liberated much later than Indian independence, there is a lacunae on the knowledge about the molluscan diversity in this part of our country. So, to understand the molluscan diversity, an opportunistic survey was conducted from June to January, at Goa’s famous, Miramar beach, a beach in the middle of the city. In the present survey, transect and quadrate method was followed. The results showed the presence of 47 species of mollusc under 23 different families on the beach, proving rich molluscan diversity in the study site. Appearance of the species varies during monsoon and winter seasons of the year. Highest number of species was recorded during the monsoon season which gradually declines with the onset of autumn and winter season. It has been speculated that appearance of molluscan species depend upon the temperature and food of the beach. Maximmum number of the species during monsoon is due to the availability of food and optimum temperature for breeding.

Abstract: Despite self-sufficiency of food at national level, a considerable population who thrive in the rural areas of India is still undernourished. As shifting cultivation remained the major cultivation practice in Arunachal Pradesh with limited and insufficient crop yield, majority of the common people rely on several hundreds of wild edibles to meet their food requirements. Present study was carried out in Papum Pare district of Arunachal Pradesh, India, where, many ethnic tribes of the state inhabit in both rural and urban areas. Several hundreds of wild edible plants and animal resources are consumed and also sold in the market places. This study has determined the nutritional quality of most commonly consumed three wild edible plants namely, Polygonum runcinatum, Pilea bracteosa and Elatostema platyphyllum which grow in the wild. Plant samples were collected from natural habitats and oven-dried, ground and further detail analyses for nutritional parameters were carried out following standard methods. Findings of this study revealed that, all the three wild edible plants were rich in total carbohydrate, protein and minerals with higher values than most of the reported wild edible plants including few common vegetables. Fat and sodium content was low but fibre and potassium content was higher than many wild edible plants and common vegetables. Hence, these three wild edible plants may be recognized as a good source of essential nutrients and may also qualify to serve as promising food plants for human consumption, particularly for the persons who are suffering from hypertension, liver, gastro-intestinal and chronic diseases.

Ethnobotanical Uses of Legumes in the Papum Pare District of Arunachal Pradesh, India

Abstract: The Leguminosae is one of the largest families of angiosperm with 18,000 species classified into around 650 generae and further classified under subfamilies Papilionoideae, Mimosoideae and Ceasalpinioideae. The largest genera reported are Astragalus with more than 2000 species, Acacia with more than 900 species and Indigofera with around 700 species. Other genera includeCrotalaria with 600 species andMimosa with 500 species. Due to its commercial, food, medicinal, aesthetic and socio-cultural values many leguminous species are being cultivated by the local tribes in Arunachal Pradesh beside their natural distribution. Here, an attempt was made for the survey and documentation of the native as well as exotic species of Leguminosae distributed along different forest types in the Papum Pare district of Arunachal Pradesh along with the ethnobotanical uses of each species by the local residents residing in the district. This study reported 43 species of Leguminosae which is classified under three subfamilies, namely: Papilionoideae, Mimosoideae and Ceasalpinioideae. Among 43 species reported, 10 species were tree, 12 shrubs, 10 species were climber & Liana and 11 species were herbaceous which is put into diverse ethnobotanical uses by the local residents (Nyishi) of the study sites.

Abstract: The herpetofuna diversity of Papum Pare, Upper Subansiri, West Siang and East Siang districts of Arunachal Pradesh has been documented after carrying out a survey for one year. These districts are located at the center part of the state representing Pare, Subansiri and Siang river basin. The species were documented by means of visual encounter survey in and around the lotic and lentic habitats of the Dikrong, Pare, Subansiri and Siang rivers system with the help of local villagers. The present study on Papumpare, Upper Subansiri, West Siang and East Siang districts of Arunachal Pradesh, India resulted in recording of 8 amphibian species belonging to 5 families viz., Bufonidae, Megophryidae, Dicroglossidae, Ranidae and Rhacophoridae under order Anura. 12 reptilian species documented belonging to order squamata and sub order serpents which comes under 3 families such as Typhlopidae, Colubridae and Viperidae; under suborder sauria 3 families viz., Scincidae, Agamidae and Gekkonidae were reported. One reptilian species belongs to order Lacetilia belonging to the family Varanidae and reptilian species comes order Testudines belonging to the family Gekkonidae were also reported. In total 40% of frogs, 35% of snakes, 20% of lizards and 5% of turtles are recorded. According to the IUCN concern all the species are comes under LC-Least Concern category except Peacock Soft shell Turtle (Nilssonia hurum ) which comes under VU- Vulnerable. Arunachal Pradesh located at the eastern Himalayan region is one of the biodiversity hotspot zones of the world. It implies presence of a number of endemic species in this particular zone. Documentation of the herpatofauna and their distribution on this hill state of eastern Himalayan zone shall help in conservation strategy of the species.

Abstract: Mithun is found in eastern Himalayan region of India covering Arunachal Pradesh, Mizoram, Nagaland and Manipur. In Arunachal Pradesh it is reared under free grazing system at an altitude of 1000-3000m (msl). Mithun has indispensable role in socio-economic and cultural practices in local tribal population. Mithun is considered as the semi domesticated animal and found grazing in open fields. It has got links with environment, agricultural practices, ecology and overall economy of the state. Because of gradual denudation of free grazing area and sacrifice of Mithuns in festive occasions, existence of this animal is at stake. The animal being vulnerable and flagship species of Arunachal Pradesh, there is a need of detailed study and documentation of pure breed in every scientific field like pathology, histology, blood profile, hormone profile and genetics etc. for sustainable management of Mithun. To make it helpful for the scientific community, detailed histological structure of Mithun liver, kidney, adrenal gland and testis is reported for the first time in this paper. Formalin fixed, paraffin embedded sections were used for routine Eosin-Hematoxylin staining. Results showed that the Mithun liver lobule is not hexagonal in shape unlike other bovine species. Cross section of kidney showed renal corpuscle, proximal convoluted tubule and distal convoluted tubule. Well demarcated cortex and medulla is observed in section of adrenal gland of Mithun. Sperms at various stages of development are observed inside the Seminiferous tubule in cross section of Mithun testis.

Abstract: Present study was conducted keeping in view the importance of ecosystem services of sacred groves particularly in the conservation of biodiversity. Inventory of sacred groves distributed in varied locations of West Kameng districts in Arunachal Pradesh was undertaken during the year 2013-2015 and assessment of a few ecosystems was done following standard methodologies. Altogether 17 sacred groves were reported from West Kameng district and most of them are associated with the Buddhist temple calledGompa . Size of the sacred groves ranges between 0.001ha and > 3ha. These groves are maintained by a family or group of clan or by the whole community. Shergaon sacred grove supports more species diversity than the Morshing sacred grove. Large numbers of important plant species like Rhododendron arboreum, Paris polyphylla, Valeriana jatamansi, Artemesia vulgaris, Swertia chirayita, Daphne papyracea etc. were present in the groves. Seven species has been identified from the groves having various religious roles in the society. About 10 species had healing properties, 2 species for agricultural tools, 17 species for food, 2 species for fodder, 4 species for fire-wood, 5 species for rituals and multipurpose. Sacred groves are the repository of diverse natural resources having robust traditions of nature conservation practices which in result supports varied medicinal and other valuable species. However, increasing threats to these groves demand new conservation approaches enabling fair share of the wider values of conservation to the local communities and positive local attitudes towards conservation goals, hence present study aims to identify their services and role play by the traditional cultural practices in conserving the biodiversity.