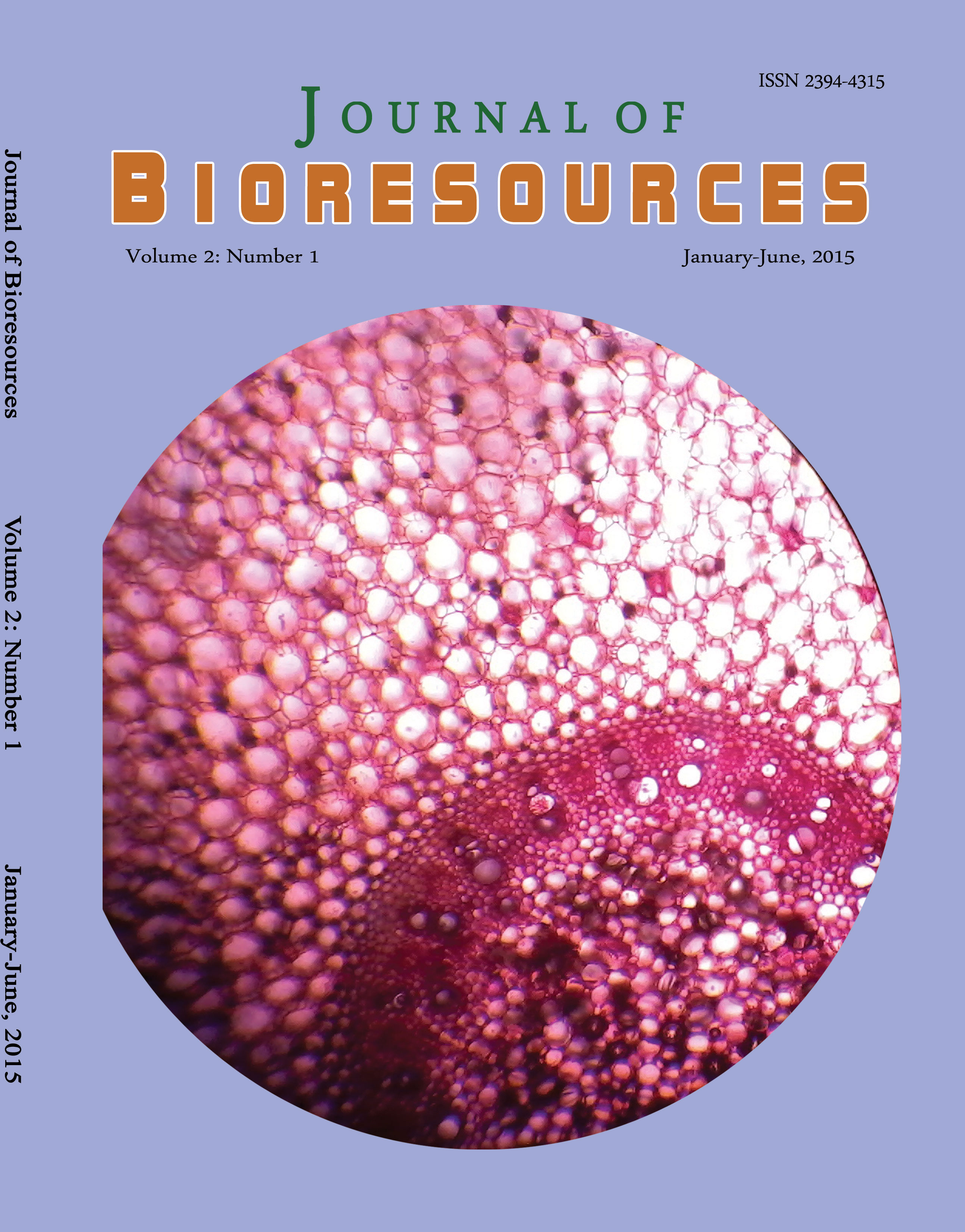 Abstract: The placental mammals belong to the order primate is one of the most diverse groups of mammals having 300 or more species and 600 or more subspecies. Apes and monkeys which are also called non human primates, distributed in the Paleotropical (old world) and neotropical (new world) biogeographical zone. This group of mammal shows a wider adaptive diversity with their remarkable range of body size. They are distributed throughout the tropical latitude at elevation up to 5000m of msl. In addition, few species of the world live at temperate and cold mountain zone (Rhincopithecus species) where temperature drops below zero degree. The asian primate has 13 genera and 176 species & subspecies. India has 17 species of primates out of which ten species are harbored at north east, the Indo-Myanmar hotspot region. All these species are critically endangered, endangered and vulnerable due to severe ecological and anthropogenic threats.

Medicinal Plants As A Potential Source For Drug Discovery

Abstract: Current report the drug discovery from medicinal plants involves a multifaceted approach combining botanical, phytochemical, biological, and molecular techniques. This search continues to provide with new and important leads against various pharmacological targets including cancer, HIV/AIDS, Alzheimer’s, malaria, and pain. However, new drug discovery is facing serious challenges due to reduction in number of new drug approvals coupled with exorbitant rising cost. This scenario has prompted us to come out with a novel approach of integrated drug discovery, where Ayurvedic wisdom can synergize with drug discovery from plant sources. The starting point for plant-based new drug discovery should be identification of the right candidate plants by applying Ayurvedic wisdom, traditional documented use, tribal non-documented use and exhaustive literature search. Bioassay-guided fractionation of the extracts of identified plant may lead to isolated bioactive compound as the new drug. This integrated approach would lead to saving of cost and time, coupled with enhanced success rate in drug discovery.

Abstract: The present study was designed to study the effect of tamoxifen in the uterus of female albino rat in presence and absence of ovary-in situ. The experiments were carried out in both the cyclic and ovariectomised (OVX) female albino rats. Tamoxifen (TAM) has been administered subcutaneously and the uterine horns were collected following the respective treatment in order to study the protein profile by SDS-PAGE in 15% gel. Estradiol-17 (E2) was used to ascertain involvement of certain other factors and TAM in modulating protein profile of the uterus. Tamoxifen induced production of new proteins in the uterus, both in presence and absence of ovary. In ovary intact cyclic female rats, new proteins were synthesized during the follicular and luteal phases along with disappearance of some other proteins in response to TAM. Ovariectomy leads to loss or decreased expression of many proteins in the uterus. Administration of E2, TAM and E2 + TAM induced restoration of many protein found during estrous and diestrous phases. In addition to the original proteins restored, few new proteins were also synthesized in response to the administration of these compounds. The study reveals that tamoxifen alters the protein profile of the ovary intact and ovariectomised female rats which may alter the normal physiology of the reproductive system of female rats.

Abstract: Dengue is an acute mosquito-borne viral infection with global health concern and is transmitted by several species of mosquito within the genus Aedes , including Aedes aegypti . Aedes aegypti is the primary vector of Dengue fever. It imposes a significant socioeconomic and disease burden on many tropical and subtropical regions of the world. The growing insecticide resistance in the primary mosquito vector, Aedes aegypti , limits the effectiveness of vector control, therefore exploration of alternative tools are urgently needed. Among the alternative approaches the use of biopesticides comprising entomopathogenic fungi, Beauveria bassiana and Metarhizium anisopliae able to reduce the mosquito vector longevity which will help in decreasing the disease transmission. Two isolates of entomopathogenic fungi B. bassiana and M. anisopliae isolated from soil samples has demonstrated its efficacy against mosquito species Aedes aegypti in the laboratory condition. The virulence of B. bassiana and M. anisopliae was tested against 2nd instar larvae of Aedes aegypti using five concentrations 104, 105, 106, 107 and 108 conidia/ ml respectively. The larval mortality was observed for a period of 10 days. Results showed that the larval mortality of mosquito larvae treated with B. bassiana in different fungal concentrations varied from 12-60% mortality. However, mortality treated with different conidial concentrations of M. anisopliae showed better results and recorded mortality rate in the range of 17-100 %. It was also observed that the larval mortality rate increases with increasing concentration of conidia in both the entomopathogenic fungal isolates. The exposure of 106 conidia/ml and 108 conidia/ml concentration the M. anisopliae showed highest (100%) larval mortality within 6 to 8 days respectively, where as in case of B. bassiana isolate a maximum of 60% mortality was observed with conidial concentration 106 conidia/ml after 8 days of treatment in laboratory condition. The present findings indicate that both entomopathogenic fungi Beauveria bassiana and Metarhizium anisopliae has the potential to be used as biocontrol agent for Dengue mosquito vector Aedes aegypti

Abstract: The state Arunachal Pradesh is reported to harbor at least 500 species of medicinal and pharmacologically significant plant species. Among these Stemona tuberosa Lour. (Stemonaceae) plays a significant role in curing various diseases. The tuberous root is reported to have anti-larval property. The tuberous roots of the species is used for preservation of cultivated seed grains and also used as a mosquito repellent agent. The water extract of the root is taken orally to relieve abdominal pain, joint pain and stomach disorder. The root extract is also used for treatment of malaria. The present study deals with the nutritional constituents and ethnopharmacognosy of Stemona tuberosa Lour. The proximate composition like ash content (2.87%), moisture (6.82%), total sugar (20.32%), crude protein (10.06%), crude fat (0.67%) etc. were obtained. Minerals like Na (0.25%), K (0.54%), P (1.26%), N (1.61%), Fe (0.43%) were analyzed in the tubers thereby showing high nutritional value. The sugar content was also quantified. The preliminary phytochemical screening of the tuberous roots showed high amount of secondary metabolites. Morphological and anatomical characters play a vital role in crude drug standardization and in pharmacognosy. The macroscopic and microscopic characters of the leaf, stem and roots were done for authentication of crude drug. Many granular and dark crystal structures indicated the presence of secondary metabolites. The ethnobotanical uses and the phytochemicals present in the roots of this plants need more elaborative studies and as such further work has already been initiated for its bioactivity study.

Preliminary Survey On Insects And Spiders From Papumpare And East Kameng District, Arunachal Pradesh With Commercial And Economic Value

Abstract: Piper betleoides is a creeper grown in wild habitat of the tropical rain forests in eastern Himalayan biodiversity hot spots. The secondary root of this creeper is traditionally being used for termination of unintended pregnancy by certain group of ethnic people of this region of India. The secondary root extract (SRE) prepared in methanol was tested in albino rats for its effects on ovary and uterus. The main aim of the present study was to determine the possible effects of secondary root extract of Piper betleoides on Graafian follicle structure and also to determine whether SRE induces structural aberration of the uterine histoarchitecture during early gestation period resulting in failure of receptivity to embryo. The extract in a dose of 250 mg/kg body weight was administered daily through oral route to normal cyclic female rats for four consecutive days begin with proestrus. Similar dose was tested in ovariectomised females and during day1 to day 5 of gestation the ovaries and the uteri of all the experimental female rats were collected at the end of SRE administration. Tissues were histologically studied following routine hematoxylene-eosin staining method. The results obtained from the present study revealed that the structure of Graafian follicles was affected by the secondary root extract causing degeneration of oocyte. Uterine luminal epithelium fail to proliferate rather, desquamated from the supporting stroma. During gestation, SRE treated females failed to achieve the decidual cell reaction (DCR). The present in vivo study showed that secondary roots of Piper betleoides contains potential compound(s) which can induce structural aberration of Graafian follicles and uterine epithelium causing failure of gestation in rat.

Abstract: Ziro, the home to the Apatani tribe and the district headquarters of Lower Subansiri district is one of the oldest towns in the Indian state of Arunachal Pradesh. The Apatanis, one of the major tribes of the beautiful state of Arunachal Pradesh are efficient natural resource managers. They are optimally utilizing the limited natural resources of the Ziro valley. The Apatani plateau is bowl-shaped, surrounded by high hills and interspersed with unique form of paddy-cum-fish and bamboo-cum-pine agroforestry practices. They have a very skilled and a uniquely evolved system of natural resource management in their settled paddy-cum-fish and the bamboo-cum-pine agroforestry system. The paddy-cum-fish cultivation involves a well integrated irrigation system enabling adequate production of both paddy and fish. The locals also possess rich traditional knowledge to maintain the bamboo-cum-pine agro-forestry. They carry out different activities in different seasons as per the needs. Ploughing of the fields, sowing of saplings, induction of fish-fingerlings into the ponds, planting of pines and bamboos, cleaning and maintenance of pine-cum-bamboo groves etc. are all done appropriately in suitable seasons. This article gives a vivid picture of the sustainable approach of the Apatanis towards managing these resources for posterity and to get maximum benefit.