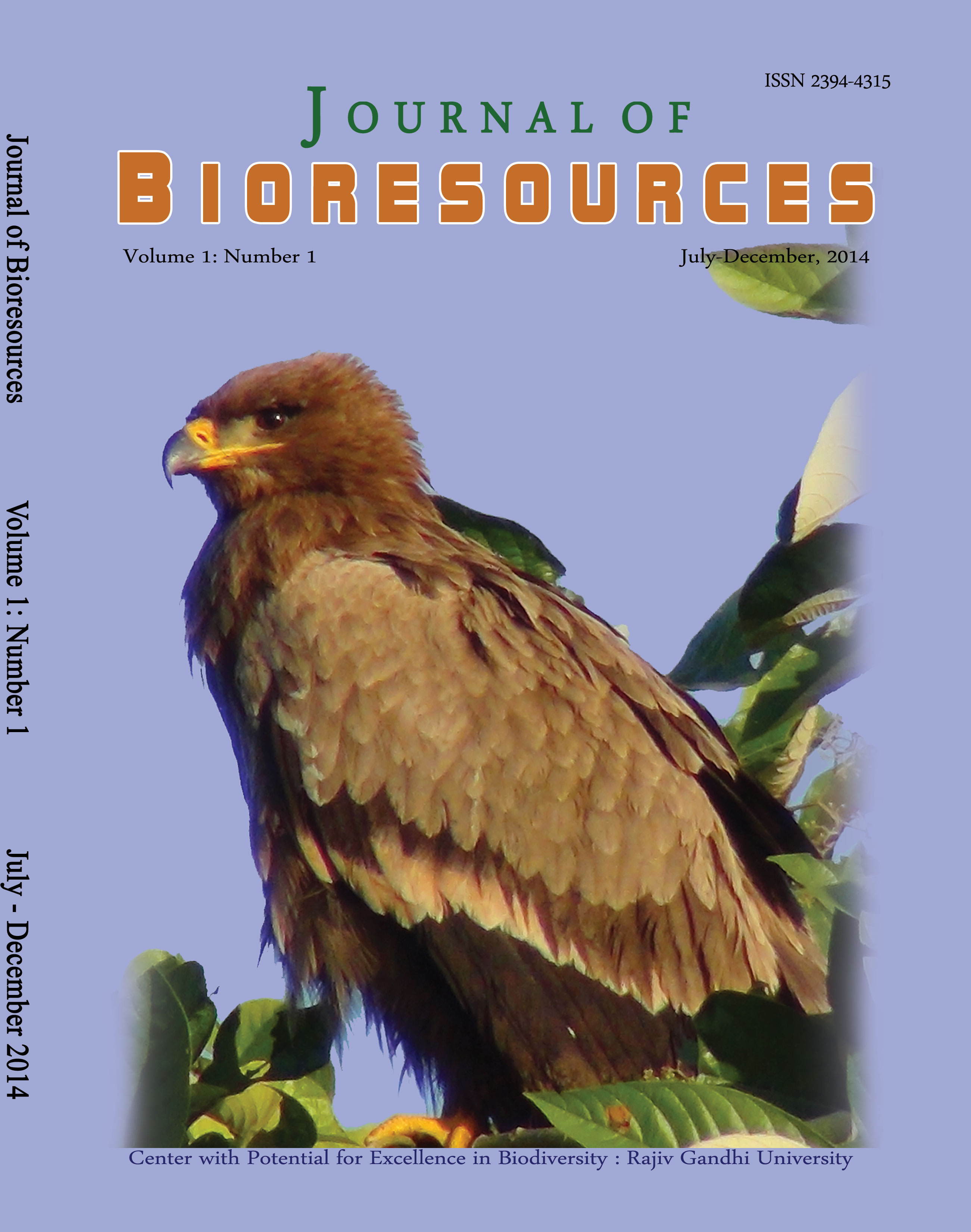 Abstract: D. butyracea (Fam: Sapotaceae) is an economically important tree with many uses of its different parts. In Arunachal Pradesh, D. butyracea is mainly found in subtropical regions of Tawang district adjoining to Bhutan. During the last 20 years, majority of the trees were dried up due to overharvesting. The seeds are recalcitrant and lose viability quickly after dispersal. The present study recorded 61 trees of which 50 plants were either dead or lost all branches and only 3 were saplings. The plant is facing great threat of becoming extinction from Tawang region. Proper in-situ and ex-situ conservation strategies and propagation techniques such as tissue culture are urgently needed.

Abstract: A survey was undertaken in the month of November and December 2012, to evaluate the species diversity of birds in D’Ering Memorial Wildlife Sanctuary (DWS). The study result in record of altogether 55 species belongs to 27 families from D’Ering Memorial Wildlife Sanctuary. Among the fifty nine species recorded, nine species are listed as threatened species in the IUCN red list. Out of the nine threatened species, three species fall in Critically Endangered (CR) category, four species fall in Endangered (EN) category and two species fall in Near Threatened (NR) category. Two species were recorded for the first time in the sanctuary. The record of 55 species in short period indicates that DWS is a highly diversity of bird species. Also, provide significant information on the distribution of threatened birds in Arunachal Pradesh, which would be first hand information to prioritize DWS as site in case of action to protect those recorded threatened species.

Assessment Of Genetic Diversity Within And Among Populations Of Acmella Paniculata (Wall. ex DC.) R.K Jansen Through RAPD And ISSR Markers

A Field Survey Of The Silk Moths (Lepidoptera: Saturniidae) In West Siang District, Arunachal Pradesh And Threats To Their Population

Abstract: Indigenous trapping system is attached with the tribes of north east India, particularly to the people of Arunachal Pradesh as part of their life and culture. Apart from agriculture as the primary source, these people depend on animal trapping practices as secondary means of livelihood in day-to-day activities. The present work was carried out in East Kameng district of Arunachal Pradesh. People of this area are fond of hunting and fishing using indigenous traps. Almost all the tribes viz; Nyishi, Aka, Miji and Sulungs use the traps for catching preys. These practices are believed to be as old as the human races with close affinity. The simple structures with unique mechanisms these traps are used in certain periods of the year. The technique adopted is unique whose mechanism works on the scientific principle utilizing the restored stress force to trap the living organisms especially birds and mammals. The practice of trapping system is environment friendly, as because these can be used as and when required without damaging environment and climate. The trapping practice could be reasonably used for keeping ecological balance when the favourable season or environment arrives for rapid explosion of fauna and flora in the nature.

Abstract: The diversity of butterflies are five families like Papilionidae, Pieridae, Nymphalidae, Lycaenidae and Hesperiidae along with their altitudinal preferences was monitored in ever green and semi evergreen forest in Talle Valley Wildlife Sanctuary of Arunachal Pradesh using transect count method have been followed. The maximum number of butterflies (64.70%) has been recorded within altitudinal ranges of 1600m-1800m. Sorensen’s similarity index has been calculated at 0.305 between 1600m-1800m and 1800m-2500m. Only 13.23% of butterflies are commonly observed in both altitudinal ranges. More species of Nymphalidae were recorded from this area than other families. The relationship between altitude, specific habitat and butterfly diversity are highlighted in this paper.